Adding: Work Slots Full.. TY!!
****
Greetings Reef Supporters,
Amid several large-scale projects coming into focus, this Tuesday, August 18th, a small scale reef/low budget project. I’m going to find out how many reef pyramids the Morning Star can carry. Will attempt to build a functional/fishable reef in one trip at our Jackspot Reef Site: a very special reef built in memory of my Mother who I lost in March.
Going to need some help.
Need 6 strong folks to help my crew and I load and deploy around forty 170lb cement pyramid reef units in two-man lifts.
Once offloaded? Then we’re going fishing for flounder & sea bass!
Pyramids are NOT light!
I already have two photographers. Need strong backs. We’ll not be taking observers or anglers. It’s a working trip.
I don’t have FB messenger on my phone – just email.
If you want to build reef and go fishing all day Tuesday, email mhawkins@morningstarfishing.com …

We received another trailer full of pyramids from Bear Concrete on Thursday – Thanks Nicky & Vernon!
We also got another load of pyramids from Atlantic Concrete in Dagsboro on Friday – Thanks Jon & Frank!
Have a few too the boys and I built in my backyard before we got slam busy. Have a really good load..

This type of reef project’s been a long time coming. I’ve envisioned a boat deployable reef since the early 1990s when we tried a variety of materials off the OC Princess. Never had any real luck with it.
About 2008 The Nature Conservancy gave me two pallets of ‘oyster castle’ block such as they use in oyster restoration.
From those 80 or so blocks back when, this coming Tuesday will make 31,000 blocks deployed—about 50 tractor-trailer loads.
Numbers like that build reef.
From a prototype we built in August, cement pyramid deployments were only begun early last fall. We currently have 167 on the bottom. If all goes well we’ll cross the 200 mark Tuesday.
Now comes a new type of block too – a unicorn for so long, yet recently found by long-time reef supporter and block magician, Jeff Bauer.
Manufactured by York Building Products (who’ve made & donated 70% or so of all our reef blocks!) ..Jeff has found the elusive 16x20inch chimney blocks. They’re huge!
Have used 16×16 chimney block for a decade—anytime we can squeeze an order in. They’re not free, but boy do they make great reef. When we strap 3 or 4 together in line I call em “Tog Condos.” They become a short length of square pipe. These new 16 x 20s will make a much larger tunnel – perfect fish habitat.
Imagine 40 or more pyramids, all deployed at once, and perhaps another load of 40 at a later date, and another. Now see dozens, a hundred or more 16x20x32 inch square pipes along with our regular daily 24+ block strapped units; envision them having accumulated two decades of marine growth.. Corals are beginning to flourish; anglers from hundreds & hundreds of boats over time will have have caught tens of thousands of fish from a reef we’ll build Tuesday — the Virginia Lee Hawkins Memorial Reef.

How long will it last? A century? Three? Millennia?
The actions men took in the dawn of industrialized commercial fishing brought marine seafloor habitat to its low in the early 1990s. Trawling and clamming today destroy almost no reef bottom. Habitat that could be lost—was lost, and lost long ago.
Yes – there are areas growing back that could be destroyed again. It’s only by luck that they’re not. But this regrown seafloor is minuscule compared to what must have existed in, say, 1950.
Consider this: There were more sea bass landed commercially from 1950 to 1961 than all years/decades since Combined. All of em.
That’s not an estimate. Those fish were sold across a dock – weighed.
Furthermore, while trap/pot harvest has remained fairly consistent across time; if graphed, the decline in sea bass trawl landings would make a nice downhill ski slope. The gear used to catch the fish ultimately destroys the habitat that produces these fish. That leaves fishers no choice but to find new bottom or a new fishery.
As essential/feeding/spawning habitat was lost decades ago, so too was any possibility of catching sea bass in that same location again. Sea bass will not use sand/mud bottoms in the Mid-Atlantic.
Lost for decades needn’t mean forever, however. It’s easy to put reef habitat back.
Like oysters, for our corals all we need is time & money..
Except with oysters we know where every reef and bar was – have studied it to a surety.
Mid-Atlantic marine seafloor habitat? Nope. It Remains Undiscovered—at least so far as science & management are concerned: fishers have known about it since we had boats to get us there.
I believe the science/management communities have been reluctant to ‘discover’ habitat that might become an issue for stern towed fisheries already struggling under a tremendous regulatory burden.
Again & again I’ve pointed out – “We cannot possibly restore reef fish populations of yesteryear with the habitat footprint of today.”
It’s as if we anticipate restoring squirrels to a 1,000 acre cornfield – a field where hardwood forest once stood.
Ain’t gonna happen.
An example from right out front: What we call “The Bass Grounds” 8/9 miles east of Ocean City MD was once about 4.5 square miles of natural hard-peat bottom with corals galore. Fishers prior to 1975 neither had, nor needed, pinpoint navigation we take for granted today. They’d run course & speed – lifeboat navigation/dead reckoning; likely stopping when they found Capt Paul Russell’s multitude of trap flags, and then drift..
I’ve been told repeatedly by old timers that anglers in the 1950s/60s rarely had to anchor for sea bass. When they did it was because of weather – not because sea bass were knotted-up on small pieces of reef as we often see today.
By the late 1970s the enormous fleet of hydraulic clam dredge boats in WOC Harbor had whittled that 4.5 square miles of reef to a few square yards..
We’ll not likely put that much habitat back. But artificial reef built today is much more robust than our region’s natural bottoms; they’ll sometimes only profile a few inches.
I believe we can indeed hope to equal historical habitat’s spawning production—especially if management learns nuances of maximizing spawning production associated with sea bass age at maturity…

These pyramids & blocks are the smallest part of what the Ocean City Reef Foundation does off our coast. There are indeed new projects in the lineup that will be among our best reefs yet.
If you’d like to help restore corals off the coast of Maryland please visit ocreefs.org.
If you’d like to direct your donation to a specific reef, you can specify that reef at the time of your donation.
Indeed, we have small and large existing reefs that you can name yourself.
We spend no monies on salaries or rent. All donations are plowed back into the business of building & monitoring reef as Required by Army Corps permits.
It’s going to be a busy fall – promise!
Regards
Monty 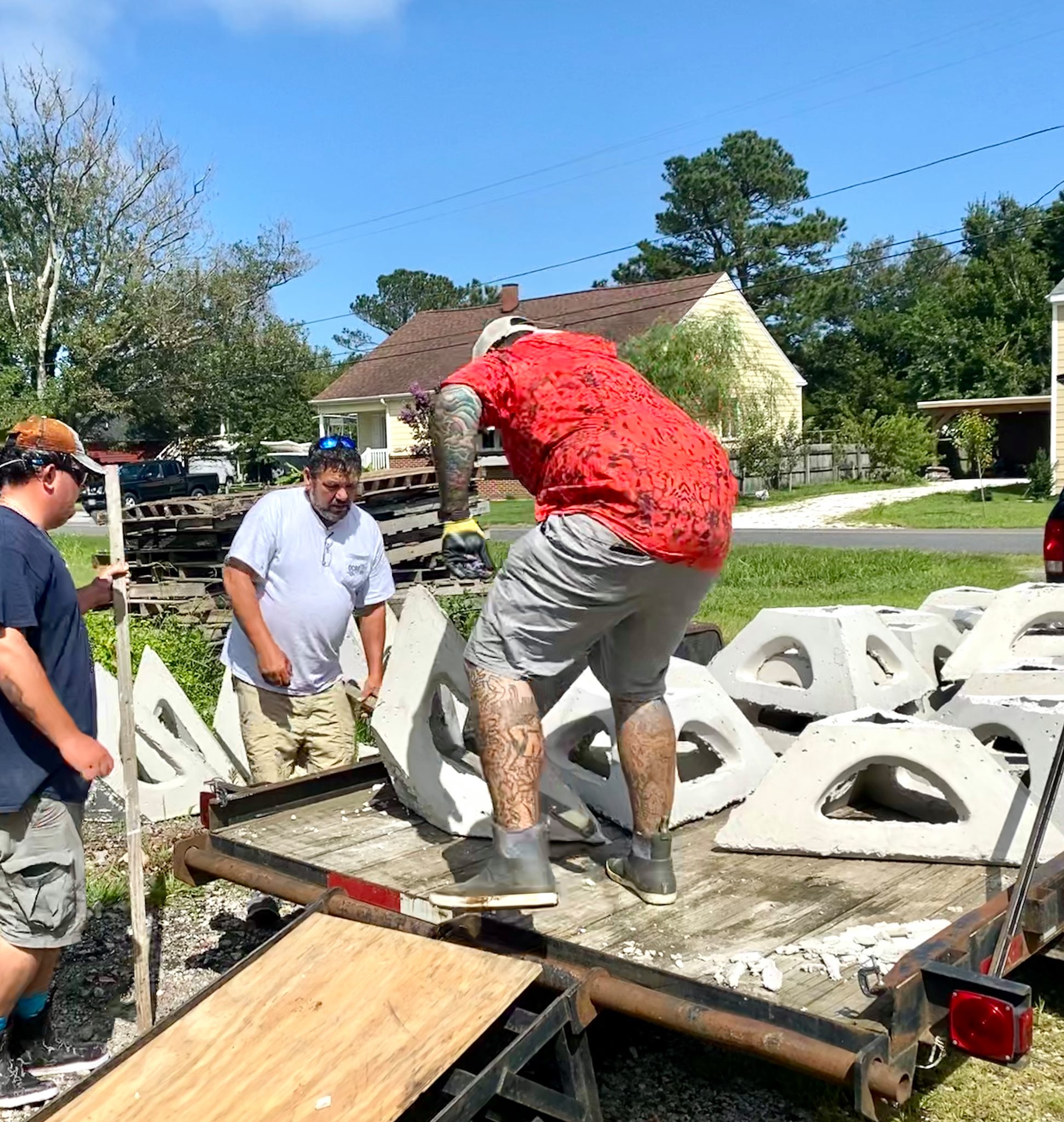 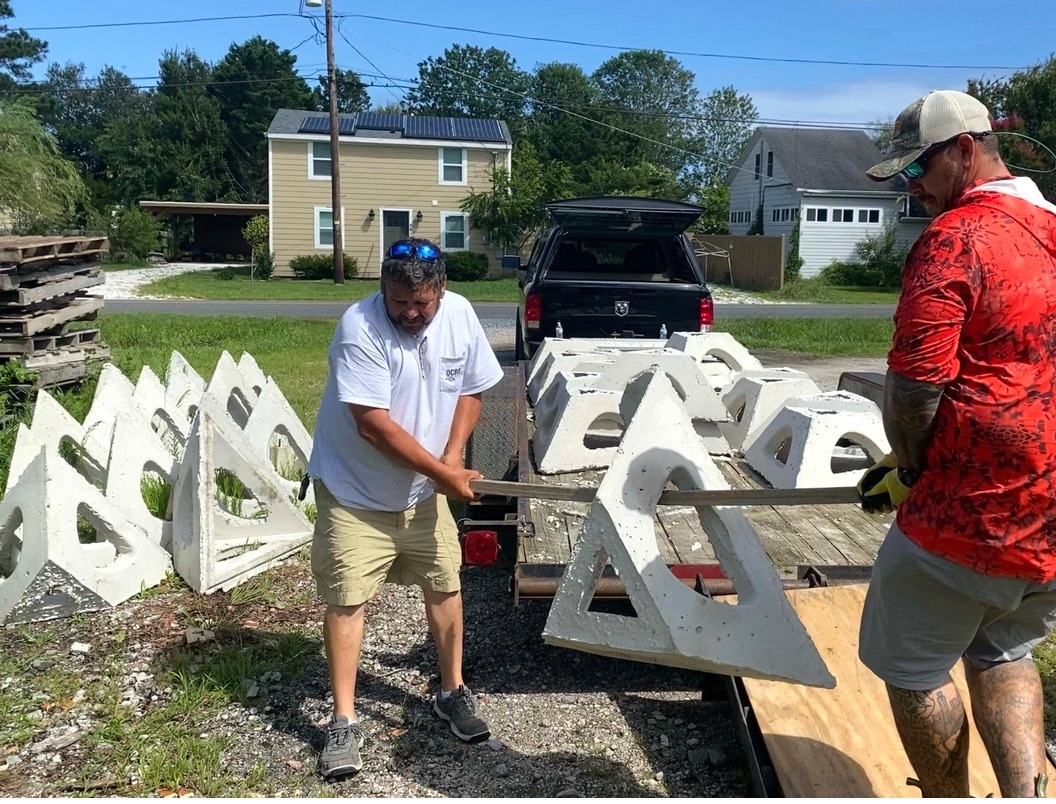 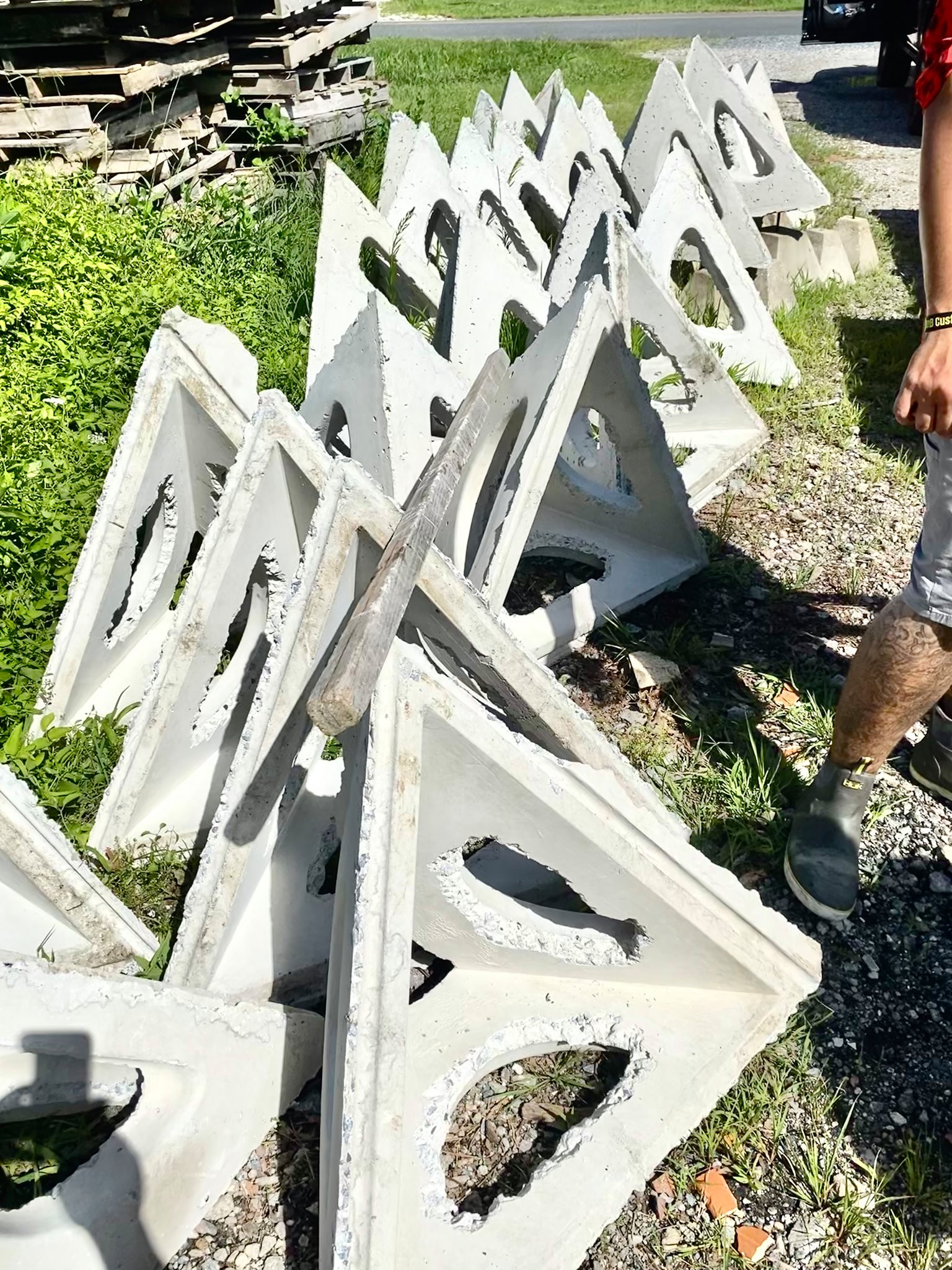 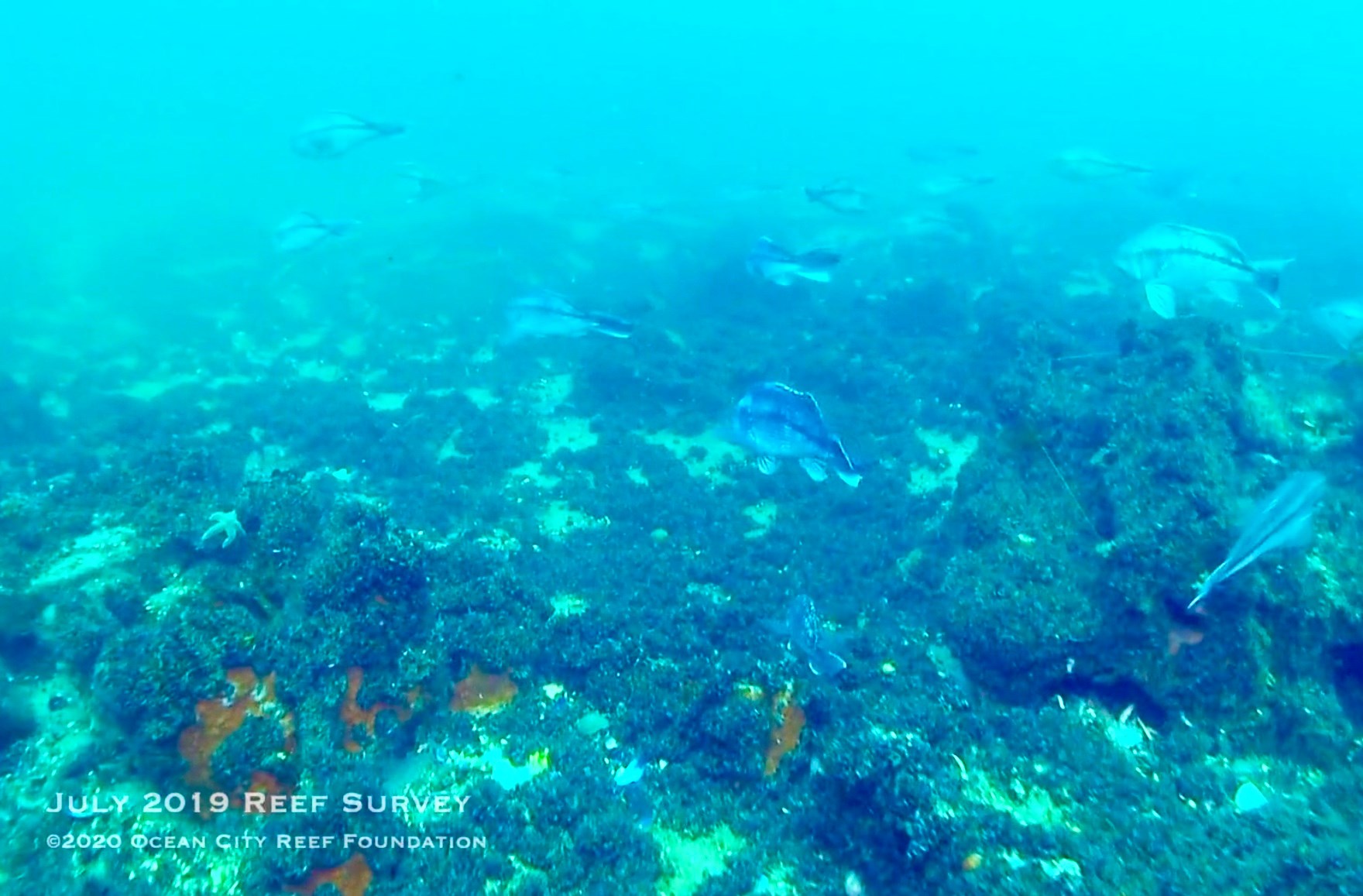 Happy Thanksgiving from our crew to yours ! We have many things to be grateful …

Happy Thanksgiving!! We had some very pretty days out on the ocean for our last…

Happy Thanksgiving from our crew to yours ! We have many things to be grateful …

Happy Thanksgiving!! We had some very pretty days out on the ocean for our last…

Plenty of Rockfish In The Inlet – Ocean City MD Fishing