Cbass 7/16/21
Pretty enough day I reckon. Weatherman had promised a bit better, wind wise; but there I go hoping the forecast is perfect. Rick K from Pasadena MD & William C of Silver Spring pushed 20 heavy blocks overboard at Capt Bob’s Memorial Reef; then we burnt some more fuel.
Sea bass weren’t schooled as tightly today. I’ve no idea why. In fact, Angelo H of Woodbine MD had the day’s only limit – he pocketed everyone’s pool money too!

Was at a Mid-Atlantic Fishery Management Council meeting years ago and witnessed a well-known Carolina trawl skipper describe how foreign boats, all painted black, come in to US waters (from the 200 mile line!?!) and take all our fish. They then escape as a vampire might; disappearing into pre-dawn twilight with NOAA and USCG none the wiser.
What a fantastic thing to believe..

This, unfortunately, is how much of my work has been perceived also.
(“Hawkins thinks those tiny patches of bottom growth are important? Too Small!! HarDeHarHar..)
(“A fisherman doesn’t like the catch estimate data? Ha! They never do!”)
(“What? He’s crazy! Those sub-bottom profilers are as quiet as a ship’s propeller. They couldn’t possibly affect fish.”)
But the worst? Try convincing people (who’ve yet to comprehend coral’s importance) that a fishery’s spawning production would be maximized by lowering the size limit.
(“NoNoNo! We have to RAISE size limits – ALWAYS HIGHER – That’s how to get management’s best result.”)

As wind power becomes reality I hope the necessity of understanding what’s really happening with our fish will finally have import. In these early years of management most any regulation worked to some extent.
Not that it’s recognized as such, but sea bass along NY, NJ & DelMarVa illustrate one of management’s failings. Yes, we’ve enjoyed and continue to enjoy the boost in sea bass population I predicted as the MD Wind Energy Area was recolonized beginning in October 2015. In May 2016 it was “All hands on deck” for spawning. Every sea bass in the MD WEA was a spawner. All sea bass from 6.5 inches up – spawning. (Any smaller and they’re still in an estuary.)
That spike in spawning production was an accident—not the least bit on purpose. It’s not even recognized as yet. We hadn’t experienced little guys spawning since 1999/2000 or so. That’s where this population boost arose – from increased spawning production because there were No Sea Bass in a 200sq mile patch holding their own spawning sites in May of 2016.
Without the MD Wind Energy Area becoming abandoned by all sea bass in 2014/15 (driven off by multi years of survey ships) and subsequently recolonized after they’d finished in August 2015; once recolonization had begun in May 2016 it had been a touch over two decades since good spawning production. Most sea bass today don’t spawn till 11.5 or 12 inches. That’s the trouble. They grow fast – males especially “fluff up” with longer tail filaments..
Where fishing pressure is high we take those sea bass off in two week waves. Where sea bass fishing pressure is extreme? They can be culled every few days. JUST as they might have begun spawning, they’re instead swimming in hot oil.
Sizzling..
Dinner.

That recent boost, so wonderful offshore a bit, never did aid our inshore reefs. Sea bass populations at reefs inside 12 miles are at emergency lows. Isn’t it odd that just a few miles further out we have the best fishing since 2003.
I’d think fishery scientists & managers would really want to understand that – and from a factual basis.
Ocean going half day boats, in fact, have been sailing longer trips so they can bypass thier traditional grounds—now a dead zone—and fish where there’s more life. They’re bringing their intense fishing pressure with them. Only now, in high summer, will they run their normal 4 hour trips—small tog & triggerfish, even robins, supplement what few sea bass they do catch.
What a shame. In the late 1990s sea bass fishing was off the chain close to shore. When a bag limit was first created in 2002 those 1/2 day boats would sometimes catch 25 fish per-person boat limits. Consider: After decades of “No Bag Limit At All,” and just 5 years of size limit management, they were catching like mad inshore. Regulation, you see, didn’t have to “build the population up” with bag/creel limit regs. Sea bass were already thriving simply from size limit regs with no bag limit at all. It was after bag limits and 12 inch size limits that production fell off a cliff.

Need to have a hard look at regulation.
When the size limit was 11 inches and less — every sea bass we threw back was a spawner. That’s especially important closer to inlets where recreational fishing pressure is highest.
Once we triggered this “don’t spawn yet, there’s a big fish here” response — only the legal fish were spawners! None of the inshore throwbacks were spawners once the size limit hit 12 inches—smalls we’re waiting another year at least to mature.
Ever decreasing sea bass numbers DelMarVa’s half day boats have dealt with have worked their way offshore reef by reef. I think by 2026 our 15/20 mile offshore reefs will be in the same shape as our nearshore reefs are today – with sea bass collapsed.

Except by then we’ll have had a few years of wind tower construction.. No matter it will have been none of their fault: wind tower/turbine construction is going to catch the blame for sea bass’s demise in coming years.
At least from fishermen.
BOEM & NOAA will blame climate change and recreational overfishing.
They won’t be right either.

Make em spawn young now and the problem will never occur.
Needs fixing.
So do several other marine issues.
Our greening sea? We know how to fix it. Oysters can be made super abundant. The grand benthic/pelagic coupling of oysters and bluewater species needs to be understood for the task it is.
Restore seafloor habitat lost 60 and more years? Find the original footprint, then roll rocks and concrete off a barge.
I like to sink the barge too when I can.
You can no more stop a reef from growing then if you left an unpainted hull in a slip two years.. Put substrate on the bottom, reef’s going to grow.
Discover surveying’s effect on sea bass and summer flounder? Just be there, you’ll see. Any number of ways to test it. Maybe the simplest thing is find out why one ship seems to have no affect while the other can shut off the bite from 6 miles away. Surveying goes on around the world. It’s affects on marine & estuarine ecosystems needs to be understood.
Regards,
Monty 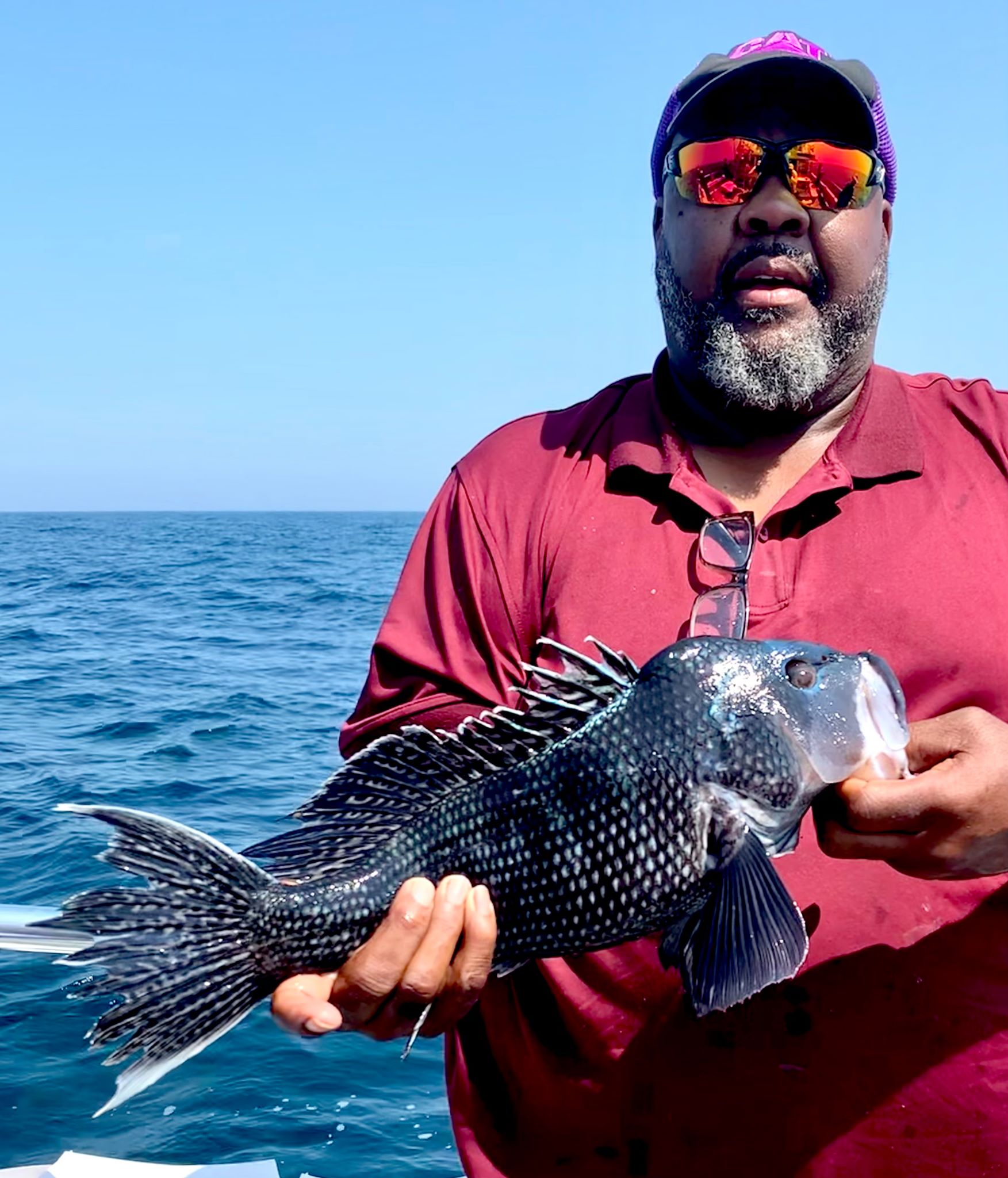 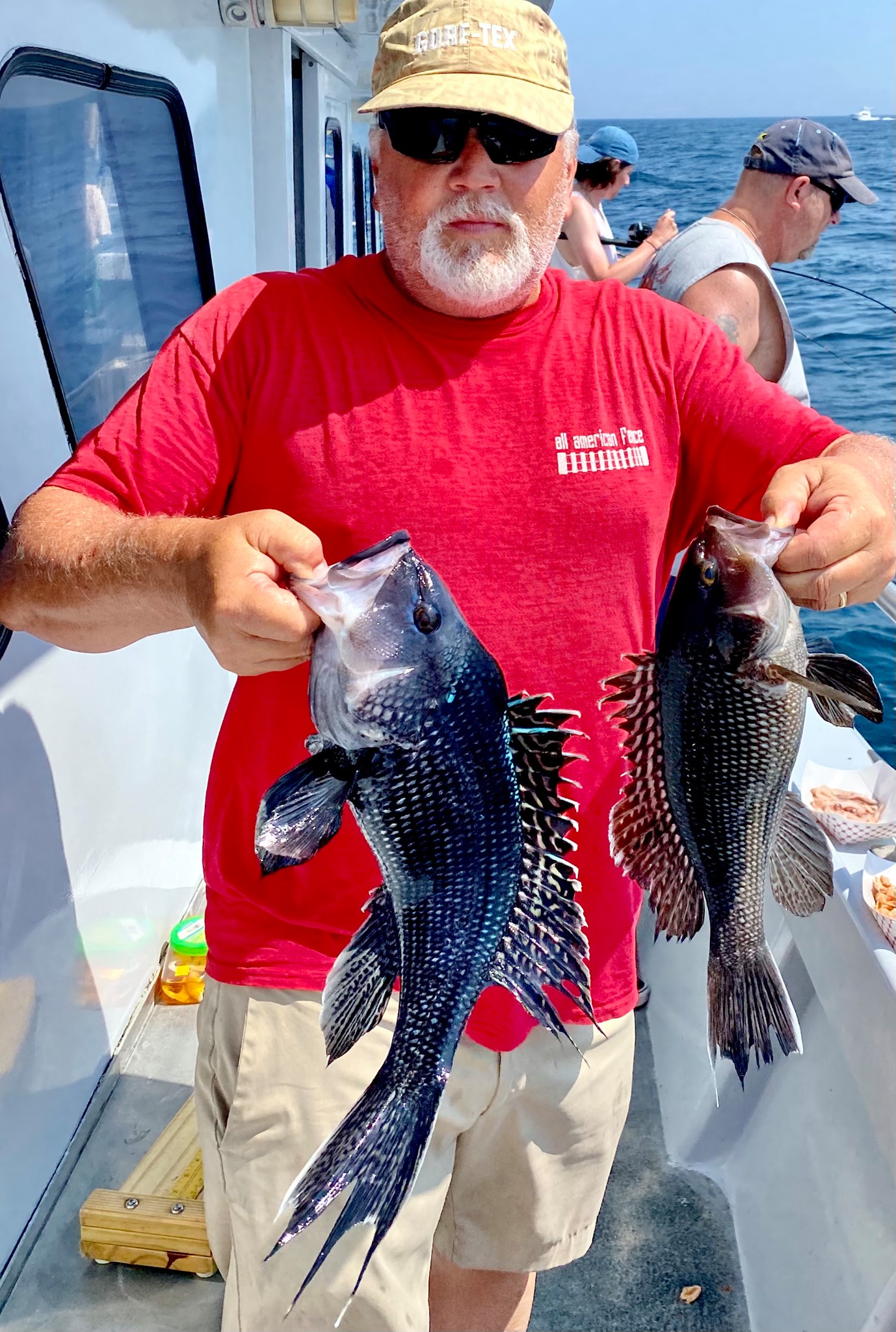 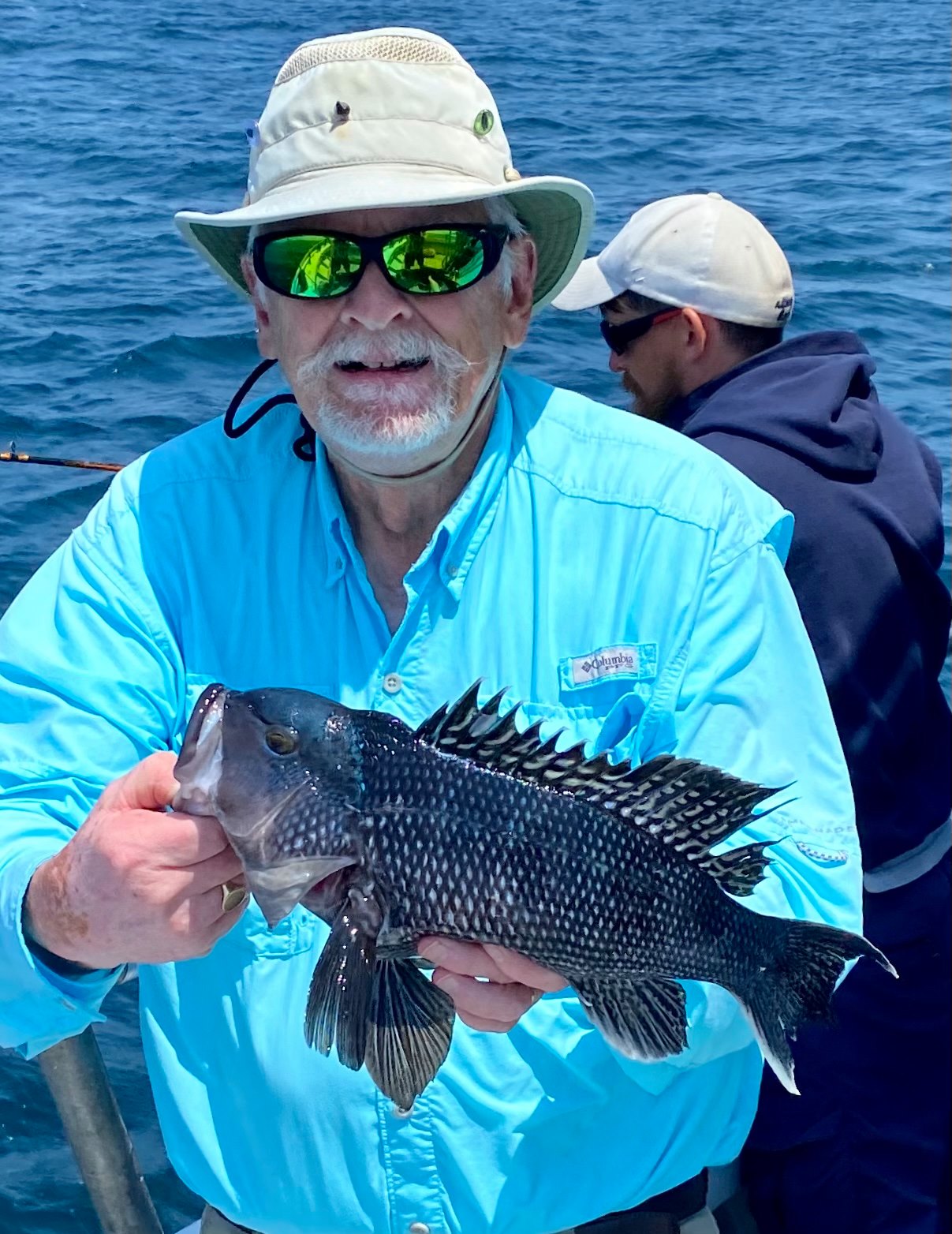 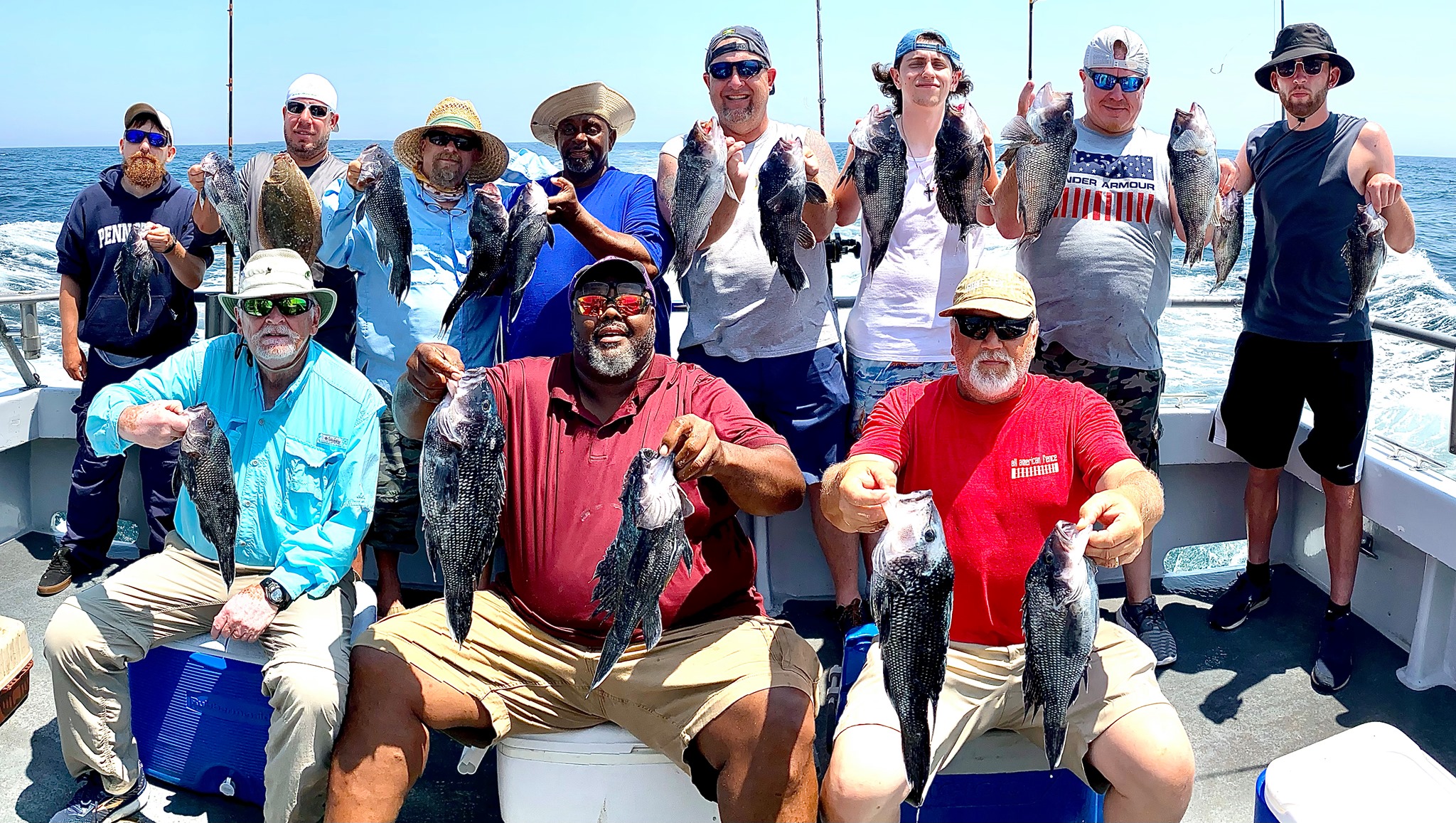