I was doing something the other day that I don’t do very often and that is cleaning my office. Chronologically deep in a corner of rolled up charts I found an old Water Works Wonders promotion poster by RBFF with an image of a grown son and an aging father with these words.Â “Take me fishing because I miss my boy. Take me fishing like I used to take you. Take me fishing and we’ll give the fish a good laugh. Take me fishing because it is easier to talk on the boat. Take me fishing because I miss my boy.”Â Those words hit me right in the heart and wanted to share them with all of you that still have your dads around. Fishing together is one of those rare opportunities for close one on one relationships between a father and son or daughter. Rekindle those relationships or build new ones if you have young children. Ken Kopro took the opportunity to take his 90-year old dad out on Loch Raven recently for some simple fishing together watching bobbers and having a great time. You can catch his story in his June 19th angler’s log. To all the fathers, sons and daughters out there have a wonderful Father’s Day this Sunday. 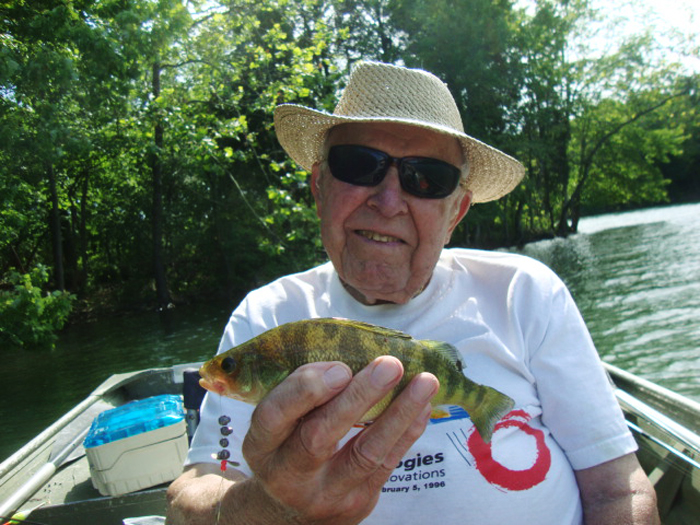 The lower Susquehanna River continues to provide excellent White Perch fishing this week for fishermen casting small lures such as shad darts, small jigs and weighted spinners. There are plenty of Channel Catfish in the river for bait fishermen and Flathead Catfish at the Conowingo Dam pool. Striped Bass are being caught at the dam pool and the lower river on swim shads. A few fishermen are live lining White Perch and rumor has it that some enterprising fishermen are transporting live Spot from areas farther down the bay and using them with great success near the dam pool. There are plenty of White Perch, Channel Catfish and enough Striped Bass to keep things interesting in the channels around the Susquehanna Flats, Elk River down to the Sassafras and Pooles Island area.

Fishermen in the upper bay are starting to poke around some of the traditional locations such as Swan and Love Points, the Triple Buoys, Dumping Ground, Baltimore Light, Sandy Point Light and Podickory Point looking to chum up some Striped Bass. For the most part many have been reporting successful trips with some nice fish coming from baits allowed to drift back in the chum slick and close to the bottom. As most know, a good tide is always important and spotting fish suspended near edges beforehand certainly helps. Fishermen describe trolling swim shads and bucktails behind umbrella rigs along channel edges and lumps as a slow pick. Live lining Spot or jigging near the Bay Bridge piers or rock piles has also proven to be successful for fishermen. Joel Henderson of Baltimore spent the day with his daughter at the Matapeake Fishing Pier and shows off a nice 30″ Striped Bass to his daughter. 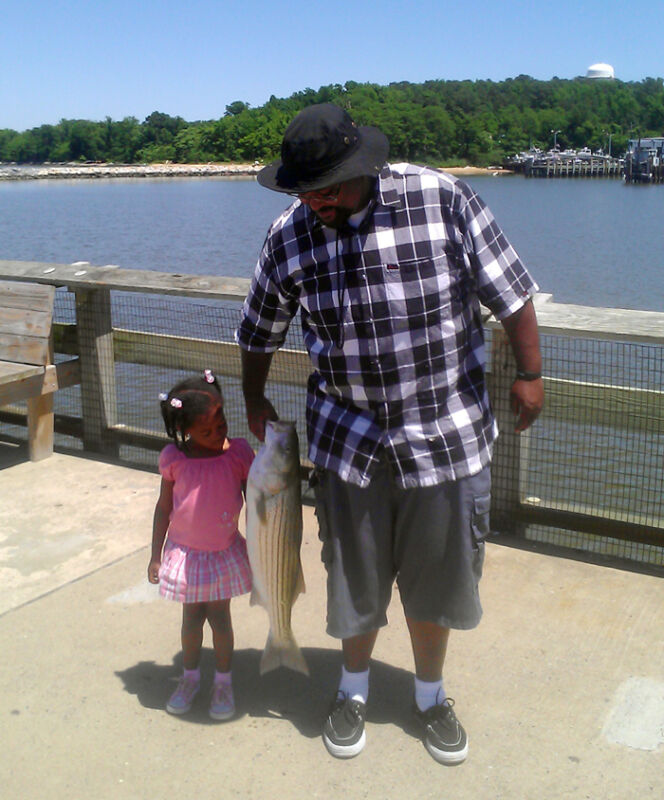 There is plenty of bottom fishing action being reported this week at locations such as Hackett’s Bar and Dolley’s Lump for a mix of White Perch, croakers and Spot as well as Striped Bass on the deeper outside edges. Fishermen have been taking advantage of the abundance of Spot in the middle bay region and live lining them on the deeper edges of drop-offs such as Thomas Point, the Hill, Buoy 83 and the Clay Banks as a few examples. Jigging and trolling along these same edges has also been productive and also in Eastern Bay. In the middle to lower bay region fishermen have been working the western edge of the shipping channel out in front of Chesapeake Beach for Striped Bass, trolling and live lining Spot have been the most productive ways to fish. Captains report that it has been tough fishing out in front of the Gas Docks this week; the Striped Bass seemed to have moved north. Fishermen in the lower Potomac River have been enjoying good fishing for Striped Bass along the channel edges by either trolling or chumming.

Water temperatures are still cool enough that the shallow water fishing for a mix of Striped Bass and White Perch in the upper and middle bay regions extends further into the morning hours and earlier into the evening hours this week. Casting a variety of swim shads, topwater lures and spinnerbaits with light tackle offers a relaxing and fun way to fish. In the lower bay region fishermen will see Red Drum and Speckled Trout thrown into the mix.

Fishermen are reporting the fishing for croakers and Spot improving significantly in the last week with good catches in tidal rivers from the lower Potomac eastward to Tangier and Pocomoke Sounds up to the Bay Bridge. In most tidal rivers White Perch are a very big part of the action. Most fishermen are using bottom rigs baited with bloodworms, pieces of wild grocery store style shrimp or squid. In the lower Potomac River fishermen will find small Blue Catfish to be a large part of their catch and Channel Catfish show up in rivers such as the Nanticoke or Choptank. Recreational crabbers are reporting that catches of good crabs is slowly improving in the bays tidal rivers and creeks. Crabs are putting on weight from the May shed. Kirk Ingram was fishing with friends near Cobb Island when they got into the croakers and White Perch for some good eating. 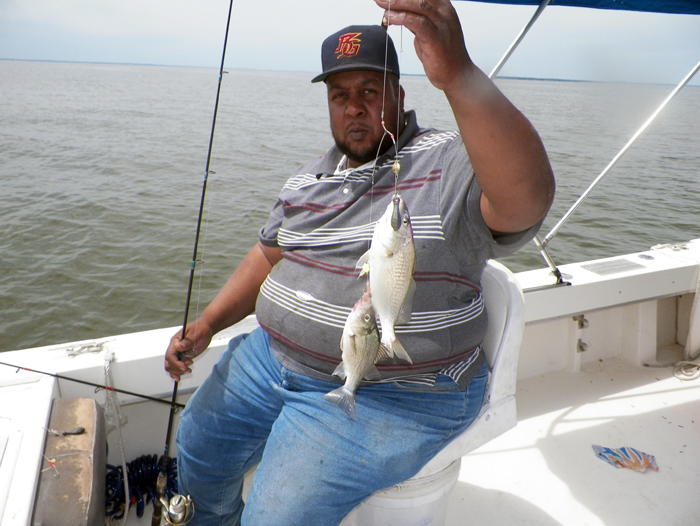 Freshwater fishermen are reporting some fun fishing opportunities at Deep Creek Lake for Largemouth and Smallmouth Bass near floating docks. They also report that Bluegills are moving into the shallower waters of the lake and offer some fun fishing with bobber and bait or small rubber-legged poppers. The upper Potomac River and trout management waters in the western region will most likely see some high water as we expect some more heavy rains later on this week. Recently fishermen have been reporting a lot of Smallmouth Bass in the 12″-14″ size range jumping on baits; larger fish have been harder to come by.

Largemouth Bass are doing a good job of entertaining fishermen this week as most are in a post-spawn feeding behavior except those in the coldest waters of the extreme western region. Fishermen are having fun casting a variety of lures from topwater buzzbaits to soft plastic jigs and catching bass around shallow structure. Grass, spatterdock fields, fallen tree tops, old docks most any kind of structure will hold Largemouth Bass who are inspecting these areas for small baitfish and crawfish. When fishing tidal waters it is often the case that fishermen will find Largemouth Bass in the cover of grass and spatterdock at high tide and on the outside of these areas as the tide drops. Fishermen often use buzzbaits and weedless lures when fishing in the cover at high tide and lures such as spinnerbaits and crankbaits on the outside edges of the cover at low tide. Steve Goldberg was fishing the shallows of Black Hills Regional Park Lake when he caught and released this nice Largemouth Bass. 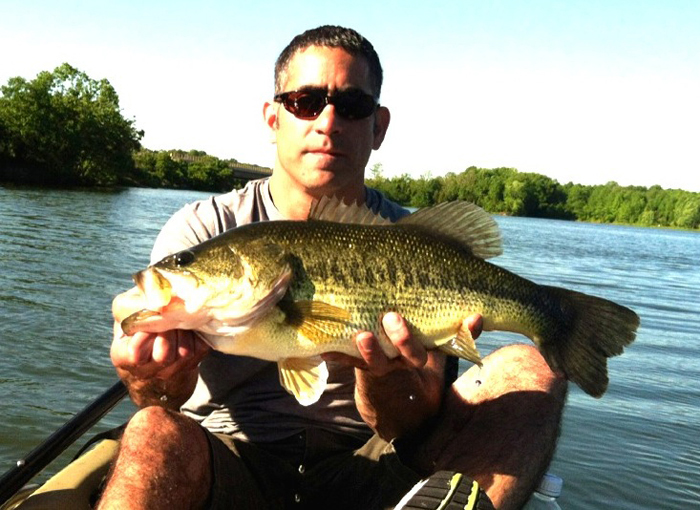 Ocean City fishermen are reporting fewer large Striped Bass this week in the surf as the main body of the northward migration may have slipped by. Enough large Striped Bass are being caught though to keep fishermen going through the onslaught of skates, rays, dogfish and inshore sharks that are chewing up baits. Everyone has been saying “bring plenty of fresh menhaden with you, you’ll need it”. Those fishing with smaller baits of bloodworms, Fishbites or squid are catching a mix of blowfish, kingfish, sea trout, Spot and a few flounder.

In and around the inlet the action is large Bluefish and Striped Bass at night and flounder, croakers and tautog during the day. A lot more fishermen are live lining spot now and with great success for large flounder and Striped Bass. Casting Got-Cha lures or swim shads is the other alternative for Striped Bass and Bluefish. Action in the back bay areas focuses mostly around flounder this week and there is plenty of good fishing occurring. Croaker, Spot and sea trout are now adding to the mix as well.

Outside the inlet fishermen are finding good fishing for sea bass at the wreck sites with tautog and flounder taking up some space in ice chests as well. The traditional fishing locations along the 30-Fathom Line are producing a mix of Mako, Tiger and Blue Sharks with some large Bluefish and Bluefin Tuna at times. At the canyon regions there were some impressive catches of Yellowfin Tuna and at least one large Bigeye Tuna made this week.